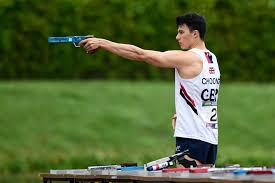 The first British man to win gold in the modern pentathlon was encouraged to take up the event because being left handed would “give him an advantage”, his former coach has revealed.

Joe Choong won gold yesterday at the Games, making him the first British man to win an individual Olympic medal in the sport, which has been in the programme since 1912.

It has now emerged he was encouraged to take up pentathlon by a coach at the Whitgift School, Croydon, in 2008 after he realised being left-handed would give the young athlete an advantage in fencing.

Charlie Unwin, a professional sport psychologist, noticed Choong’s talent as a swimmer when was just 13-years-old.

Mr Unwin said: “He stood out in the pool, so I convinced him to complete a “bleep” test to see if he could run – which he could.

“I also noticed he was left-handed which can offer a distinct advantage in the fencing discipline of [modern pentathlon] because by holding the weapon in the other hand it creates an unfamiliar profile for the right-handers fighting against you.

“Effectively it changes the nature of the target they are trying to hit.

We are on holiday from Monday 10th to Friday 15th Jan and as such we are pausing orders for this short time. The shop will resume shipping orders on the 18th of Jan as normal. Dismiss