Another battle has been won in Peter Luff’s long campaign for left-handed rights.

That was the reaction of the Mid Worcestershire MP to the news that the Government’s new National Curriculum for primary and first schools will ensure left-handed pupils receive specific teaching to meet their needs.

Peter had successfully challenged the last government to ensure that left-handed children were taught properly by incorporating their special needs in teacher training.

Last month Peter wrote to the Department of Education seeking reassurance that the often overlooked needs of left-handed pupils would be included in the Government’s new national curriculum.

The Minister of State for Schools, Nick Gibb, confirmed in his response to Peter that,

“The government understands that left-handed pupils have particular needs. I can reassure you that in paragraph 38 of our draft Programmes of Study for the new primary National Curriculum, which included English, we have made it clear that teachers should ensure that left-handed pupils received specific teaching to meet those needs.”

In the draft National Curriculum document, which is available online, it states that teachers must,

“Make sure that left-handed pupils receive specific teaching to meet their needs.”

“Being left-handed myself I remember the difficulties I had when learning to write or just trying to cut paper shapes with right-handed scissors.”

“There are easy techniques available to help children write properly and to ensure their left-handedness isn’t a problem in the classroom. Teachers must be trained to deal with these issues to ensure that left-handed children can learn properly – and the curriculum must ensure they are encouraged to practice what they have learned.”

“I’m delighted that proper provision will be in place within primary and first schools to ensure the special requirements of left handed pupils are properly met. It doesn’t take much, but failure to do it can mean that young left-handed people never reach their full academic potential.”

A Department of Education spokesman said:

“Handwriting is the most fundamental building block of being educated. Every single parent expects their children to be taught how to write properly at school. The current National Curriculum stipulates this as an absolute central part of primary school lessons.”
The Daily Telegraph October 2011

January 2009
Article by Anjana Ahuja in The Times 2 of Tuesday 27th January about Barack Obama’s handwriting technique! “Room for improvement” is suggested!

February 2008
Launch of the New Stabilo “Easy ergo” pencil, which is the follow-on from the Stabilo ” ’Smove Easy” pens which have proved such a hit with both right and left-handers!

January 2008
Interview for BBC Radio Wm on some of the potential difficulties of being left-handed!

“… provide a structured and attractive course that could help a left-hander to become a competent, confident writer.”

Book 2 is “Funky Formation and Flow”

All books have been specifically designed with young left-handed children in mind. Opening vertically so that the child doesn’t have the left hand caught in the usual spine of the book, there are icons on each page to show pencil grip and page angle as well as specific letter formation for the left-hander. Advice for Parents and Teachers is included as well as “Top Tips” on every page of Book 1. Helpful contacts and product information is also included.

“Schools” version also available. This is an amalgamation of all three books, in mono, and fully photocopiable. Are now available on CD for purchase with E-Learning Credits. 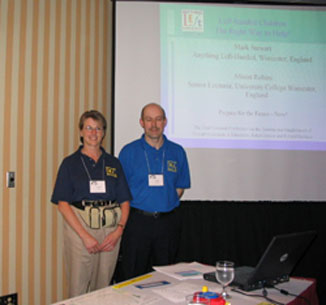 Presentation of workshop at the National Resource Center for Paraprofessionals Annual Conference in Los Angeles. 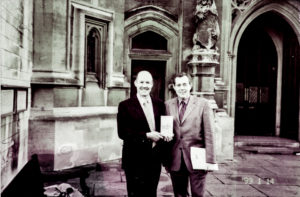 Launch of video.
Distribution of the video and wallchart to ALL providers of initial teacher training funded by the Teacher Training Agency. Parliamentary question by Peter Luff MP to the Minister for teacher training about the video.

July 1998
Sponsorship agreed with The Post Office, Berol and others to produce video and wallchart.

27th May 1998
2nd letter from DFEE admitting that “there are no current Government plans to make training for teachers in respect of left-handed children a compulsory part of initial teacher training”.

May 1998
SENCO guidelines finally published with NO mention of left-handedness.

7th April 1998
Letter from DFEE accepting that it would be desirable for teachers to be aware that being left-handed may cause difficulties for some pupils.

13th January 1998
Letter from Estelle Morris MP to Peter Luff MP accepting that being left-handed may cause difficulties for some pupils.

20th November 1997
Letter from David Blunkett’s (Secretary of State for Education) Private Secretary agreeing that left-handedness should not be defined as a special educational need.

27th August 1997
letter sent to Anthea Millett defining our final arguments as to why there should be a specific policy in the SENCO guidelines.

25th July 1997
Letter from Anthea Millett confirming non-inclusion in the SENCO guidelines but saying “Given the newly outlined requirements for all teachers undergoing initial teacher training, I would expect them to be made aware of all factors which affect how children progress including the effects of left-handedness. In the attached copy of the National Standards for SENCOs you will note the many references to the need for all teachers to identify and address individual needs and the responsibility of the SENCO, particularly in the section on professional knowledge and understanding, to keep abreast of current issues.”

June 1997
Letter received from Estelle Morris MP, then Minister for teacher training, via Mike Foster MP for Worcester City stating that the SENCO guidelines were NOT going to mention individual special education needs.

January 1997
Suggested wording for entry in the SENCO guidelines sent to TTA “Special Educational Needs Co-ordinators must be fully aware of the specific guidelines set out for teaching left-handed children in all areas of the curriculum but with particular attention to handwriting skills, to ensure that left-handed children develop a comfortable and efficient writing style through correct positioning and posture.”

14th November 1996
Meeting at the TTA (Peter Luff MP, Mark Stewart and Lauren Milsom). Suggestion by Anthea Millett Chief Executive, and still in post now, that there should be specific policy in the new SENCO guidelines even though she appreciated that being left-handed was not a special need. It never has been our view that being left-handed is a special need – rather it is a matter of equal opportunity! She said that she would personally support this inclusion. She also suggested making a training video to dovetail with the SENCO requirement.

7th May 1996
Written reply from the DFEE to Parliamentary question. “Teaching methods and arrangements for the induction and in-service training of teachers are not centrally prescribed. It is for schools and teachers to determine the most effective way to ensure they meet the needs of all their pupils, using the resources available to them. The Secretary of State specifies broad criteria for courses of initial teacher training, including the need for new teachers to be able to respond to these criteria. All schools and courses of initial teacher training are subject to independent inspection followed by published reports”.

17th April 1996
Written reply from the DFEE to Parliamentary question “The Department does not collect information on what proportion of pupils are left-handed, nor on whether being left-handed has an impact on likely educational achievement”. Also “The Teacher Training Agency accredits course providers to ensure that they meet the Secretary of State’s criteria. These criteria require new teachers to be able to identify and to respond appropriately to relevant individual differences between pupils. Despite being left-handed, I see no need for further information for providers in this respect”.

18th January 1996
Letter from TTA admitting lack of training for trainee teachers “It is true that initial teacher training does not, at present, contain guidance about how to help left-handed children”